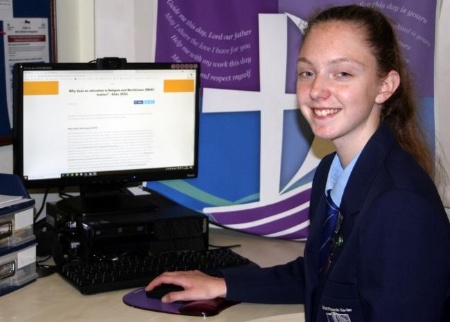 PUPILS from St. Francis Xavier School in Richmond have overcome stiff competition to win one of the top prizes in a blog competition.

Last month the RE department submitted a number of students' blogs to a national context on the role and significance of an education in religion and world views.

Among the blog entries, pupils cited the role of religious education in helping understand diversity in the modern world and in providing vital preparation for today’s complex society. They highlighted respect and empathy as key values the subject encourages, as well as to recognise and stop prejudice and discrimination, adapt to societal changes, and celebrate diversity.

Many spoke of the role that the skills they gain and the understanding of religious and non-religious world views can play in later life, saying it can help careers such as law and diplomacy, as well as promote better communication in the workplace.

The young people also highlighted the importance of religious education on the school curriculum in helping promote academic and personal growth, with some stating that it has been ignored for too long.

RE teacher, Kim Nicholson said, “It is encouraging to see pupils recognise how religion and world views can help them develop key skills that are transferable to other subjects and to the future workplace, as well as an understanding of and respect for different worldviews, both in and outside of the classroom”.